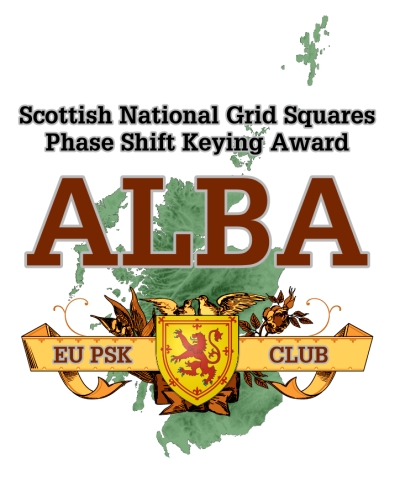 The ALBA PSK Award Series was devised by the European PSK Club (EPC) on 7th September 2009. This was to sponsor a series of PSK awards for contacts with amateur radio stations from various Scotland's 10 x 10 km National Grid Squares (also known as WAB Squares). The system used is the Ordnance Survey of Great Britain «National Grid Reference» (NGR). This form the basis of the ALBA Award.

Alba is the Scottish Gaelic name for Scotland. It is cognate to Albain in Irish and Nalbin in Manx, the other Goidelic Insular Celtic language, as well as similar words in the Brythonic Insular Celtic languages of Cornish (Alban) and Welsh (Yr Alban) also meaning Scotland. Hence also the early classical name Albion. It was used by the Gaels to refer to the island as a whole until roughly the ninth or tenth centuries, when it came to be the name given to the kingdoms of the Picts and the Scots (Pictavia and DÃ¡l Riata), north of the Firth of Forth and the Firth of Clyde, traditionally considered to have been unified by Kenneth MacAlpin. The region Breadalbane (BrÃ ghad Albainn, the upper part of «Alba») takes its name from it as well. The Latin word alba is the feminine singular form of albus, meaning white in English.

Scotland is covered by 100 x 100 kilometre grid squares, each grid square is identified by two letters - HP, HT, HU, HW, HX, HY, HZ, MC, NA, NB, NC, ND, NF, NG, NH, NJ, NK, NL, NM, NN, NO, NR, NS, NT, NW, NX, and NY. These squares are further divided into smaller squares by grid lines representing 10 kilometre spacing, each numbered from 0 to 9 from the south-west corner, in an easterly (left to right) and northerly (upwards) direction, e.g. HY61, NL79, NS56. Please use this PDF leaflet as a visual aids. And here is a list of all 1161 squares available in Scotland. Quite handy Locator Calculator can be used at G0HZK website. Please note that Rockall Island is located in the north Atlantic Ocean, 461.5 kilometres from Ardnamurchan Point, the nearest point on the Scottish mainland. Rockall Island lies in MC01 square for the purposes of this award program.

ALBA 25, ALBA 50, ALBA 75, and ALBA 100 Awards may be claimed by any licensed radio amateur, club station or DMS/SWL eligible under EPC Awards General Rules who can produce evidence in a form of ADIF log of having contacted or monitored amateur radio stations from 25, 50, 75, and 100 squares respectively on BPSK31, BPSK63, BPSK125, QPSK31, QPSK63, and/or QPSK125 modes. Credit will be given for contacts made on any of the amateur bands below 30 MHz. Each square counts only once. Contacts made to claim ALBA awards have no time or date restrictions.

Please make sure that the COMMENT field in your ADIF log contains #WAB code for each contacted station from Scotland, # tag is required. This is a mandatory requirement to make able the manager's software to check your application correctly. 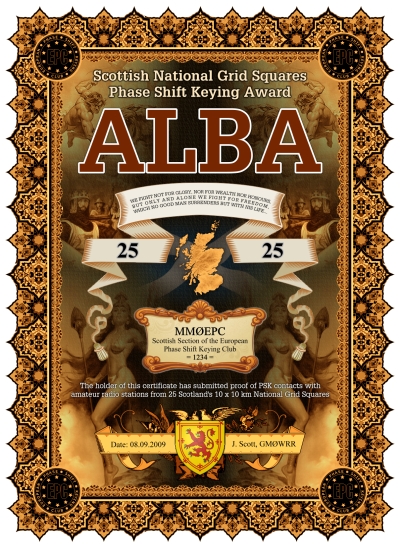 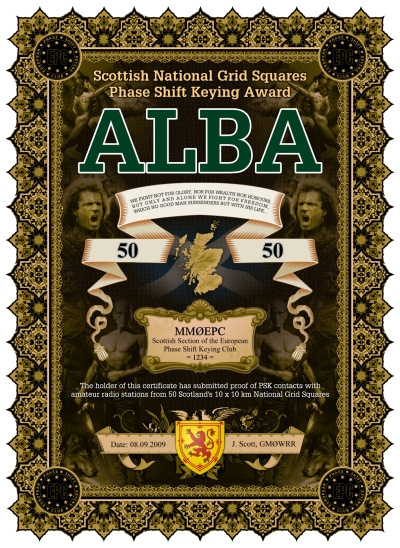 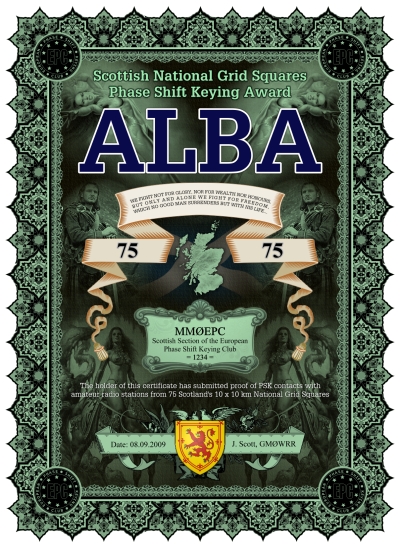 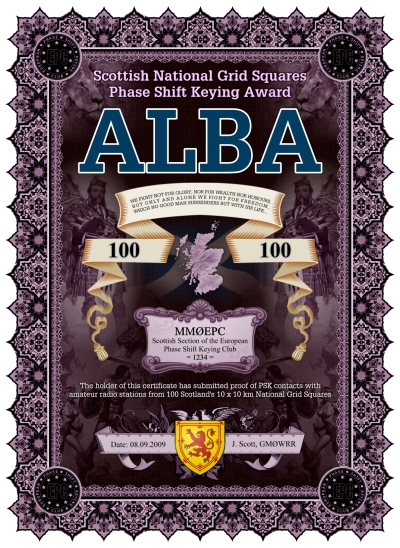