The Kingdom of Denmark is a constitutional monarchy and a community consisting of Denmark proper in northern Europe and two autonomous constituent countries, the Faroe Islands in the North Atlantic and Greenland in North America, with Denmark as the hegemonial part, where the residual judicial, executive and legislative power rests. Denmark is divided into five regions and a total of 98 municipalities (counties). Greenland and the Faroe Islands have autonomous status and are largely self-governing. Apart from the official administrative system in Denmark, EPC has assign three Exceptional EU Areas within the country - Anholt Island (DK.DX.AN), Christians Islands (DK.DX.EH), and Hessel Island (DK.DX.EH). Amateur prefixes in the Kingdom of Denmark are 5P, 5Q, OU, OV, OW, OX, OY, OZ, and XP. Please note that OY prefix can be used on the Faroe Islands, and prefixes OX and XP - in Greenland only. Just to let you know that at the moment we have two official EPC stations licensed in Mainland Denmark - 5P1EPC and OZÃ˜EPC.

The Danish PSK Award Series (DKPA) has been devised by the European PSK Club on 13th May, 2011. This award series is based on administrative geography of the Kingdom of Denmark and issued for PSK contacts with various Danish regions and counties as ruled below. Awards from the DKPA series may be claimed by any licensed radio amateur, club station or DMS/SWL eligible under the EPC Awards General Rules who can produce evidence in a form of ADIF log of PSK contacts in accordance with the specific award rules listed below.

Contacts are valid on or after 10th June 2006. Contacted or monitored stations should be EPC members. As an exception from the rule the applicant can ask the award manager to include his contact with none-EPC member in case if she/he knows for 100% correct EU Area and Grid Locator of that station. Please use corresponding fields of your ADIF log to keep such information clear (EU Area should be written down in the «COMMENT» field in #AREA XX.XX.XX format, and the station's Grid Locator should be written down in the «GRIDSQUARE» field in XXÃ˜Ã˜XX format, or in the «COMMENT» field in #GRID XXÃ˜Ã˜XX format, where «X» is a letter from A to Z, and «Ã˜» is a number from Ã˜ to 9). If you have any additional questions or concerns of any kind, please do not hesitate to contact the DKPA award series manager - Lars Henneberg, OZ1HPS. 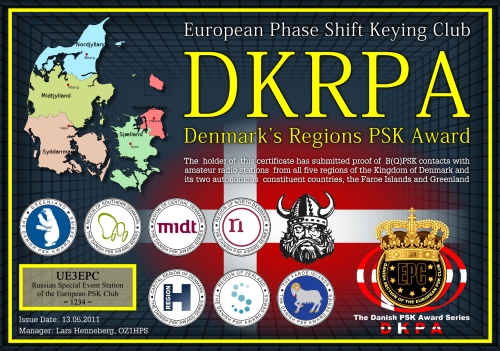 DKCPA-20, DKCPA-40, DKCPA-60, DKCPA-80 and DKCPA-90 awards are issued for two-way PSK contacts or SWL/DMS reports with 20, 40, 60, 80, and 90 different current EU Areas (counties) within Denmark (all EU Areas starting with «DK» in ther codes) respectively at the time of application. Each DX Territory of Greenland from DXDA-2294 to DXDA-2299 inclusively can be used as a «Joker» to replace any missing EU Area within Denmark. 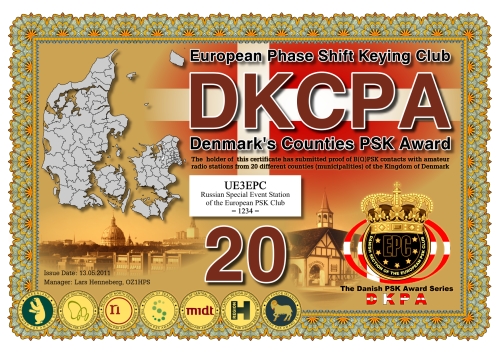 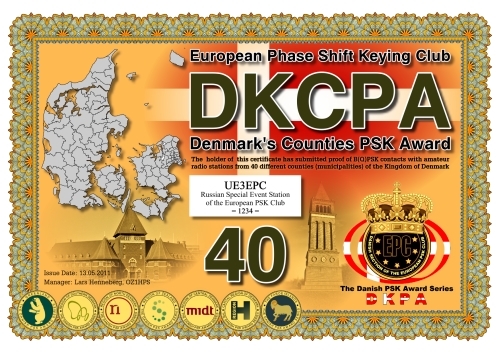 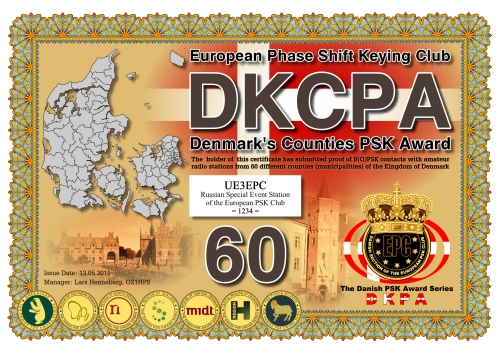 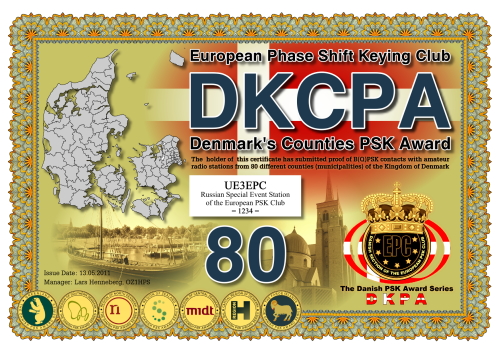 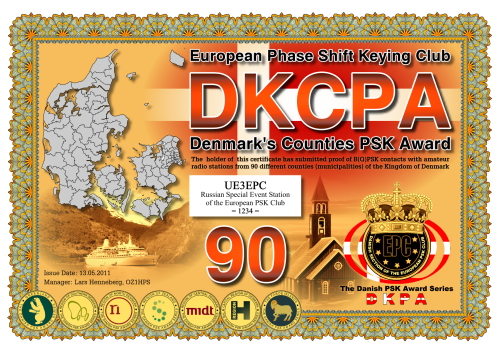