The EPC Members Award Programme (EPCMA) was devised by the European PSK Club on 10th June 2006. This was to promote European PSK Club and to sponsor a series of awards based on PSK contacts with EPC members. The basic EPCDX award is issued for 100 EPC Numbers. To claim an EPC Number you must work or hear the call sign to which the number is issued. A Short Wave Listener's EPC Numbers may be claimed if confirmation is received from the SWL. Credit will be given for contacts made on any of the amateur bands below 30 MHz Contacts for EPCMA awards count on or after 10th June 2006.

The EPC Members Award Programme consists of seven different awards - EPCAF, EPCDX, EPCEU, EPCAS, EPCNA, EPCSA and EPCOC. Awards may be claimed by any licensed radio amateur, club station or SWL eligible under EPC Awards General Rules who can produce evidence in a form of ADIF log of having contacted different EPC members as specified below by using any type of the Phase Shift Keying. All claims must be submitted with the corresponding EPC application form available on our website. 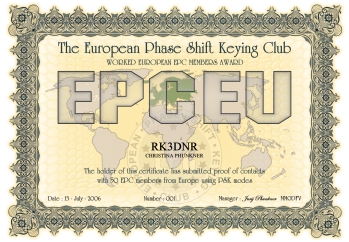 50 contacts with EPC members from Europe 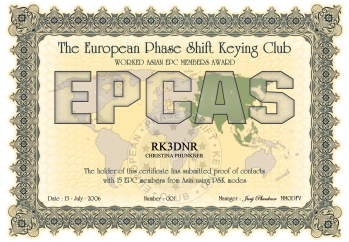 15 contacts with EPC members from Asia 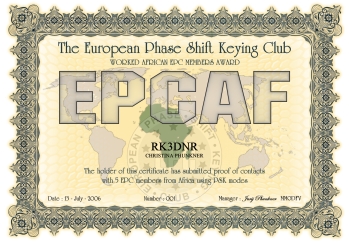 5 contacts with EPC members from Africa 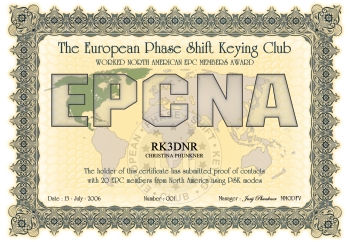 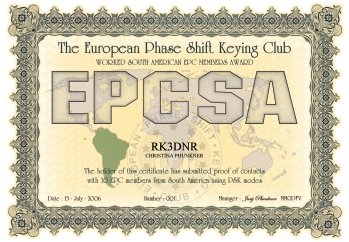 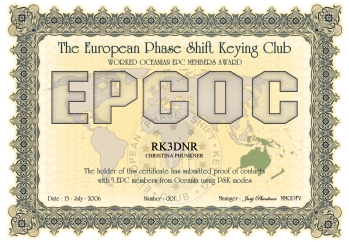 5 contacts with EPC members from Oceania 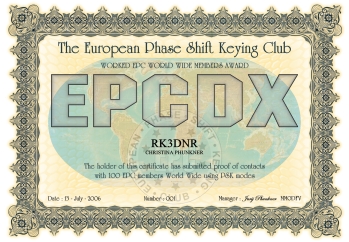