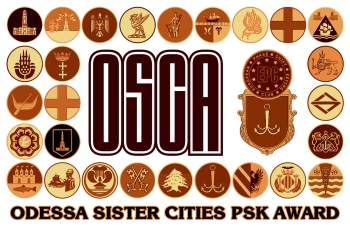 The Odessa Sister Cities PSK Award Series (OSCA) was devised by the Odessa Section (Ukraine) of the European PSK Club (EPC) on 6th April 2009. This was to sponsor a series of PSK awards for contacts with amateur radio stations from various Odessa Sister Cities (Twin Towns) throughout the World including Odessa City itself. Sister cities, also known as town twinning, is an agreement between towns, cities and even counties in geographically and politically distinct areas to promote cultural and commercial ties. Odessa City and its 26 sister cities are listed below under their official English names.

OSCA 15, OSCA 20, and OSCA 25 awards may be claimed by any EPC member (either licensed radio amateur, club station, or DMS/SWL) eligible under EPC Awards General Rules who can produce evidence in a form of ADIF log of having contacted or monitored amateur radio stations from 15, 20, and 25 cities (listed above) respectively at the time of application on B(Q)PSK31, B(Q)PSK63, and B(Q)PSK125 modes. Credit will be given for contacts made on any of the amateur bands below 30 MHz. Each city counts only once. Contacts are valid on or after 10th June 2006.
Please make sure that the «QTH» field in your ADIF log contains the contacted station's city. It must be a clear English name of the city as listed in the table above without any abbreviations or additions. This is a mandatory requirement to make able the manager's software to check your application correctly. 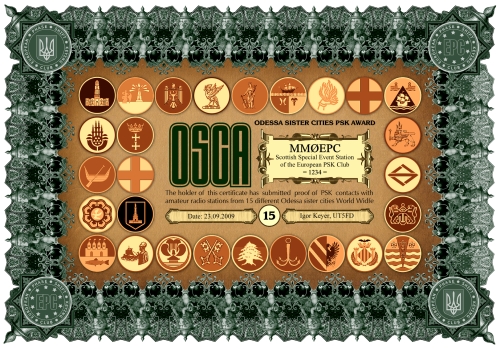 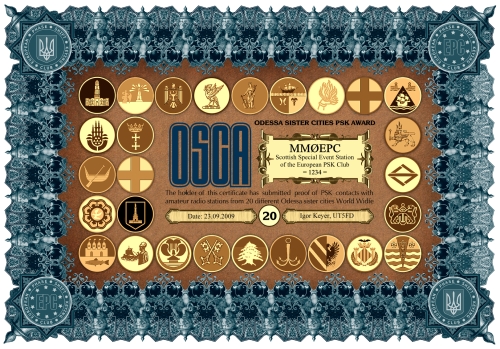 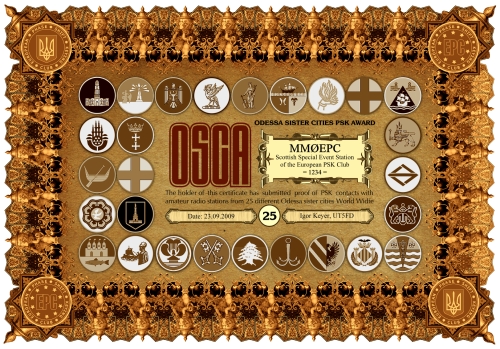